The KOKR was founded in 2008 by Shōda Hideo (1941—), the 3rd Sōke of Aragaki-Ryū, as a result of a request by Leonard J. Pellman Shihan to formally affiliate the Nippon Budō Seishin-Kan with Aragaki-Ryū.  Prior to that request, no formal organisation had existed to promote Aragaki-Ryū beyond its one small dōjō in Nagoya, Japan.  In 2009, Shōda Sōke appointed Pellman Shihan as Hokubei Buchō (North American Branch Director) of the KOKR and assigned him the responsibility of promoting Aragaki-Ryū throughout North America.

Aragaki-Ryū is an eclectic style of Okinawa kobujutsu created by Higa Yasuhiro (1908—1984) shortly after World War II.  Although Ryūkyū kobudō is a more popular term for the art as it is taught in most other styles, Higa Shihan insisted that it was not the correct term for the art he taught.  "I was born in Okinawa; not Ryūkyū, " he once explained, "The Kingdom of Ryūkyū ceased to exist before I was born.  It was conquered by Japan in 1609 and became Okinawa-ken in 1879.  It has been Okinawa-ken ever since, and will remain Okinawa-ken.  The weapons we use are all common on the island of Okinawa.  Even if some of them were first used on other islands, it was on the island of Okinawa that they were formalised into a uniform system of budō.  All the sensei who taught me this art were also Okinawan.  And all of the kata they taught me were created on the island of Okinawa.  So, for me, it doesn't make sense to say 'Ryūkyū kobujutsu' anymore.  The art I teach came from Okinawa, so I call it Okinawa kobujutsu." 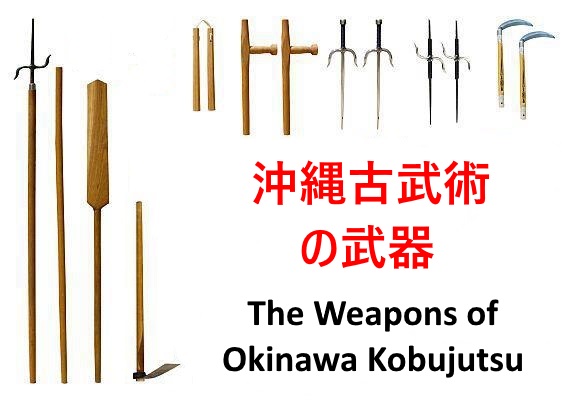 Okinawa kobujutsu is a  form of armed budō that originated in what is now Okinawa-ken, formerly the Kingdom of Ryūkyū, and primarily from the main island of Okinawa itself.   The word "kobujutsu" means "ancient peacemaking art," and from this it could be inferred that forms of Okinawa kobujutsu predate the development of karate-dō as a formalised system of defence in the ancient Kingdom of Ryūkyū.

The art uses a variety of objects as weapons, most of which were  common tools that were readily available in every farming or fishing community—meaning everywhere on an island—or slightly modified versions of those tools.  A prime example of this is the bō, which is a six-foot long staff about an inch in diameter that was found in every Okinawan household prior to World War II.  These rods served as clotheslines, drying poles for fish, meat, and animal hides, carrying heavy loads, walking sticks, and many other uses.  They were even used for centuries by low-ranking constables who were not permitted to possess bladed weapons.  Other examples include common garden sickles, sculling oars, garden hoe, and fishing gaff.  Okinawa kobujutsu is the art of using these implements in a precise and scientifically thought out manner to defend against attacks with the military weapons of that era:  primarily swords and spears, but also the weapons of Okinawa kobujutsu itself.

Aragaki-Ryū is a rare style of Okinawa kobujutsu formulated by Higa Yasuhiro (1908-1984) shortly after World War II based on the instruction he received from some of Okinawa's most famous and talented masters of the art.

What makes Aragaki-Ryūunique is that it blends the principles and methods of most major styles of Okinawa kobujutsu into a single, comprehensive, and uniform system of budo.  In much the same way that Mabuni Kenwa combined the teachings of Itosu Ankō, Higaonna Kanryō, Aragaki Seishō, Go Kenki, and others into a unified style of karate-dō, Higa Shihan combined the teachings of Aragaki Seishō, Aragaki Ankichi, Higa Seikō, Chinen Masaami, Taira Shinken, and others into a unified and comprehensive system of Okinawa kobujutsu.

The weapons taught in the core curriculum of Aragaki-Ryū are:

The Role of the Seishin-Kan

The Nippon Budō Seishin-Kan serves as the North American shibu (branch) dōjō of the Kokusai Okinawa Kobujutsu Renmei.  It has the responsibility and goal of promoting Aragaki-Ryū throughout North America.

In that role, the Seishin-Kan is, for all intents and purposes, the North American hombu (headquarters) for Aragaki-Ryū.  The Seishin-Kan's dōjō-chō, Leonard J. Pellman Shihan, was appointed in 2009 to serve as the primary representative and Hokubei Buchō (North American Division Director) of the KOKR.

As part of its responsibility as the Hokubei shibu, the Seishin-Kan also operates and maintains this KOKR English language website until the KOKR develops the capacity to operate its website independently.

Aragaki-Ryu Okinawa kobujutsu is now being taught three days each week at the Victory Dōjō in Universal City, Texas.

This is an opportunity for everyone living in the greater San Antonio to train in this unique and eclectic system of Okinawa kobujutsu.

Visitors are always welcome to quietly observe classes in progress, and to enquire of our instructors and students either before or after our scheduled classes.

Detailed information is available by clicking here to go to the Victory Dōjō page.